New study about treatment of facial spots or hormonal spots 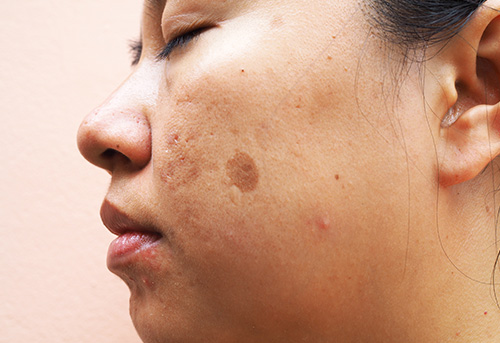 New study about treatment of facial spots or hormonal spots

I would like to share with you a new study that has been published about the treatment of facial spots or hormonal spots. Hormonal spots are a very common problem affecting specially women in fertile age. These spots appear related to hormonal but nobody knows the exact cause underlying this condition. These spots can appear for years or decades, getting worse during the summer months and better in the winter.

In this study they recruited 50 patients and randomly divided them into two groups of 25. Each group received a different treatment. In the first group topical Hydroquinone 4% cream was applied on the face for three months. In the second group another drug was added orally, Tranexamic Acid. Tranexamic acid (TA) has been shown to be a well proven whitening agent both orally and topically.

After 3 months of treatment, topical Hydroquinone 4% (HQ) induced a MASI reduction of 10.9% whilst adding oral TA reduced MASI 55%. Three months after having stopped the treatments, the MASI in those patients with only topical HQ treatment was reduced by only 4.7% whereas those that had both topical HQ and oral TA still had a 42% reduction in the MASI results.

The study was performed between several clinical centers in Indonesia and the University of Dallas.

The addition of Tranexamic results in 5 times greater reduction in the reduction of pigmentation. It is safe and can be given for periods of three to six months without seeing any side effects.

Categories
Recent Posts
New study about treatment of facial spots or hormonal spots 09th Apr 2020
Finasteride: a hair loss treatment that could save your life but everybody is afraid of 12th Mar 2020
What diseases have I got to think about when I see dark spots on the face 03th Dec 2019
Archives